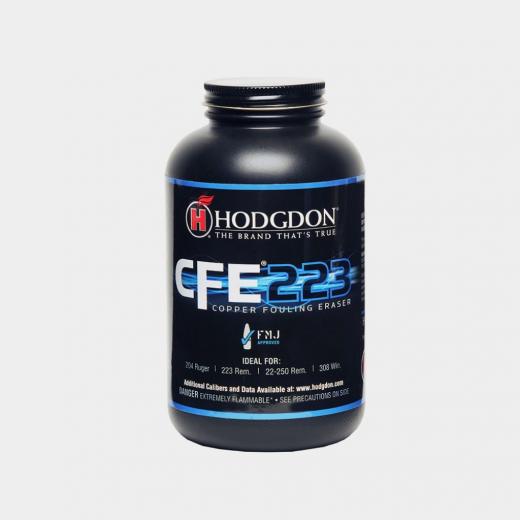 More about this powder:This spherical propellant yields top velocities in many cartridges such as the 204 Ruger, 223 Remington/5.56mm NATO, 22-250 Remington and the 308 Winchester/7.62mm NATO, plus many, many more. CFE 223 contains Hodgdon's Copper Fouling Eraser ingredient, originally used in military propellant, which greatly deters copper fouling and contributes to longer periods of top accuracy with less barrel cleaning time. Being a spherical powder, metering is superbly accurate.

Hodgdon
The Hodgdon Powder Company began in 1952 as B.E. Hodgdon, Inc., and has become a major distributor of smokeless powder for the ammunition industry, as well as for individuals who load their own ammunition by hand. The company's corporate office and manufacturing facilities are located in Kansas, United States. Hodgdon acquired IMR Powder Company in 2003. Winchester branded reloading powders have been distributed in the United States by Hodgdon since March 2006. In January 2009 Hodgdon acquired GOEX Powder, Inc., located in Minden, Louisiana, the only manufacturer of black powder in the USA. Together these product lines make Hodgdon one of the largest manufacturers and distributors of gunpowder in the world.
n the opening days of World War II, a chemist friend of Bruce E. Hodgdon was casually reminiscing about World War I. He mentioned the quantities of surplus smokeless powder the military had dumped at sea after the war; and speculated how useful that would have been to handloaders struggling through the Great Depression. He anticipated a similar surplus powder situation might occur after World War II. Hodgdon began investigating availability of surplus powder when the war ended; and sales to handloaders began in 1946. One of the first powders he found was 4895 used for loading .30-06 Springfield service ammunition. He purchased 25 tons of government surplus 4895 for $2000 and then purchased two boxcars to store it in preparation for resale at 75 cents per pound. His family initially packaged the powder for resale in the basement of their home.
In 1947, he began acquisition of 80 tons of spherical powder salvaged from disassembled .303 British military rifle cartridges manufactured in the United States. By 1949, he was marketing the powder as BL type C. The C was to indicate the powder burned "cooler" than traditional Improved Military Rifle (IMR) powders. In 1949, he began acquisition of powder salvaged from disassembled Oerlikon 20mm cannon cartridges. This powder resembled IMR 4350 in appearance, and with a slower burning rate, was initially marketed as "4350 Data", and later as 4831.
Website